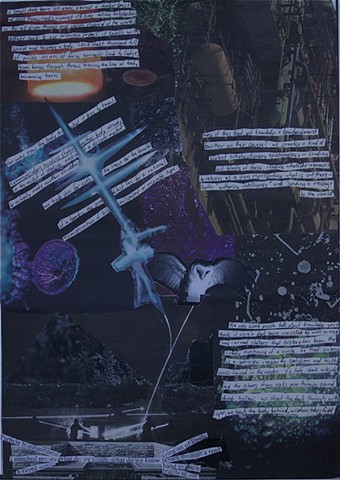 a small dark barn set alone against a darker forest. we once threw rocks against its side, taking satisfaction in the full drum thump and warm resound of the world's answer back to our primitive probes. it swells with sound and becomes a body, like a chest thumped full of pride. an arc of force connects limb to lodge, from bones through throw, tracing the line of body becoming barn.

was it this that set knowledge and bombardment together on their course? we practice a kind of violent echolocutionary epistemology -- sending out blasts of force, reading whatever manages to return as a sign representing what is out there -- both 'gathering intelligence' and 'sending a message to the world'.

far away now the body from what it tries to know. communication involves shaking another body already in the midst of shaking, making it a delicate matter to actually make another shudder. we trade skin for eyes, the image for the breath of a bomb, the sense to detect lies for a rational reconstruction of bits of newspaper or movable type.

the way some people talk about knowledge, you'd think it were a dark barn encircled by well-armed long-armed stalkers, that history has been the steady tightening of a circle, so that science is a sphincter, reason the speculum, and truth cross-haired in the center. it's late, dark outside, and the echoes from rocks once thrown sound dumb, hollow, we shoot the dark through with light, we leave the body behind, wisdom takes fright.

particle bombardment, launched probes, x-rayed bones what do we bomb, what do we know laying on of hands, breath through a reed, hand to drum, braille to see